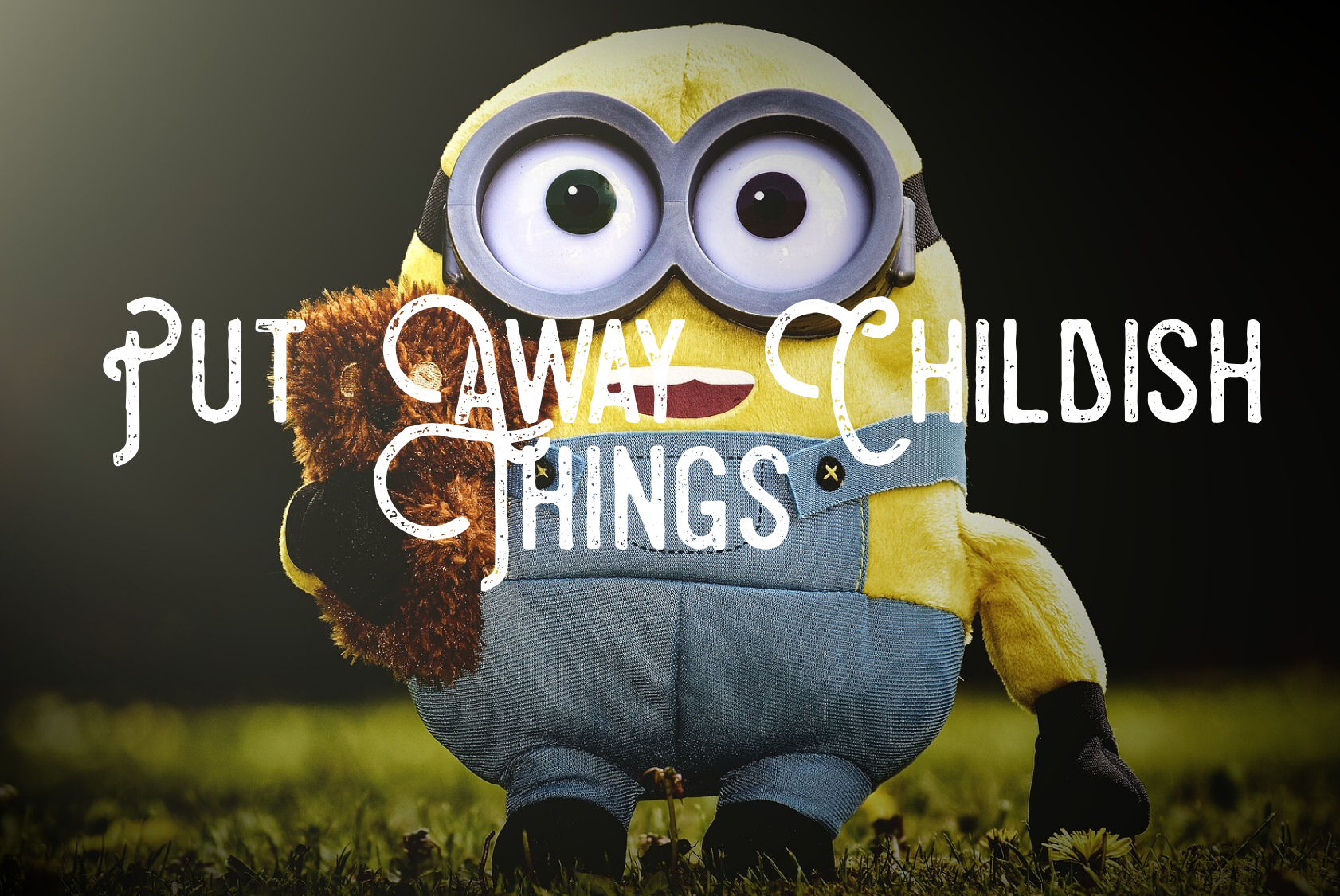 I think 1 Cor. 13:11 has a lot to say to pastors. I have never be accused of being too quiet. EVER! As far back as I can remember, I found trouble because of the volume of my voice. But it wasn’t only because of decibel levels. Attention was a need of mine. Laughter and attention was the desired reward. Loudness and randomness was the way to get it. By the second day of every school year, my desk somehow found it’s way right next to the teachers. It was the same at church.

My mom was the Children’s Church director during my childhood years. In my mind, and the mind of all the kids at our church, getting sent to my mother was like getting sent to the principal’s office at school. I spent a lot of time in offices. On the school side, I think I am second all-time in detentions at my middle school! That would have been something to be proud of it it wasn’t the first loser. On the church side, my mother was patient and kind! But everywhere I went, it was the same result, “Jared calm down and be quiet!!”

Then I grew up and became a pastor! For the first six years of ministry, my preaching and pastoring looked a lot like my life as a kid. It was loud and obnoxious. Everything I did was about shock value. I did have a firm commitment to exposition, but it was childish exposition. I was different! I was cool! Instead of being braggadocios about not preaching in a suit I was braggadocios about not preaching how-to sermons like all those seeker guys! To be sure, I didn’t wear a suit, hoodies and the occasional hat were my preferred preaching attire. Pharisees hated me and they seemed everywhere. God had clearly sent me to bring freedom to the captives. All these Christians needed me to tell them it was okay to drink and that it was cool to bring coffee into the sanctuary (Gathering space)… Yawn! God’s grace had got a hold of me, but I was still in chains methodologically. I had not put childish things away.

Two things marked my 7th year of pastoral ministry. I became a father, and God put me in a church that was 73% over the age of 60. It was time to grow up or degenerate into the expositional version of Ed Young’s Wrestlin.

Fatherhood has a way of changing you. To state it more accurately, God changed me through fatherhood. When my son Ransom was born, I thought a lot about the man I was and the man I wanted him to one day become. Being loud is one thing, but living loud is another. Living loud, making a splash, getting attention, gathering personal glory, that is not what I wanted to model for Ransom. Christlike resolve, confident humility, consistency of personhood, security in Christ, patience to endure in and out of season times of life, that is what I wanted for us. I wanted him to be a man of holy independence, a man of moment by moment conciseness, and a man who knows how to work hard from a place of rest in Christ. God rescued me from a wide life and ministry and invited me into a simple deep life. Think 1 Thess. 4:11-12 “Aspire to live quietly, and to mind your own affairs, and to work with your hands, as we instructed you, so that you may walk properly before outsiders and be dependent on no one.”

The second big piece had to do with pastoring older people. I was an associate pastor in a church that did not understand “Shock factor.” What bubbled up to the surface of my conciseness was the reality of my childish evangelism and missiology. I don’t know the heart of every “shock factor” pastor, but this heart wanted to be seen as cool and relevant as much as or more than I wanted God to be glorified. I don’t understand why hearing “I can’t believe he said that!” was such an upper, but it was. That kind of ministry claims to draws crowds, but not crowds around Jesus. It’s a crowd around a person or a way but not the way of Christ. Childish ministry had to go. God had given me a love for older people, so I had to put away childish things.

Pastor, at some point you are going to have to grow up. Don’t simply assume you can do anything the Bible does not condemn. Don’t be the pastor that calls for humility in your accountability group all the while modeling pride in your preaching and methodology. Matt. 6:1-4 applies to more than giving.  The implications lay upon church methods as well. Don’t be the pastor  who lives to be seen by others. Let’s give Matthew the last word.

“Beware of practicing your righteousness before other people in order to be seen by them, for then you will have no reward from your Father who is in heaven. Thus, when you give to the needy, sound no trumpet before you, as the hypocrites do in the synagogues and in the streets, that they may be praised by others. Truly, I say to you, they have received their reward.3 But when you give to the needy, do not let your left hand know what your right hand is doing, so that your giving may be in secret. And your Father who sees in secret will reward you.